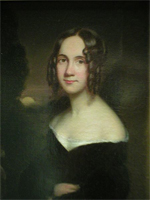 The person who was singularly responsible for the completion of the Bunker Hill Monument was Sarah Josepha Buell Hale, the daughter of a Revolutionary War officer and one of the nineteenth century’s most prominent magazine editors.

A native of Newport, New Hampshire, Sarah Josepha Buell was born to Captain Gordon Buell and Martha Whittlesay Buell who believed in equal education for their daughter. While Sarah’s brother, Horatio, was able to attend Dartmouth College, she studied the classics at home and the books he shared with her. Sarah taught school for several years before marrying David Hale, an attorney, in 1813. As their five children were born, David encouraged Sarah to continue writing.

In 1822, David Hale died suddenly and Sarah was left with five children to support. She opened a millinery shop briefly, but her passion was writing. Her husband’s Freemason lodge supported the publication of her first book of poems, The Genius of Oblivion, in 1823. Sarah’s first novel, Northwood, an anti-slavery work that appeared in 1827, established her literary reputation and caught the attention of Rev. John Lauris Blake who asked her to become the editor of his new magazine for women in Boston called Ladies’ Magazine.

Sarah moved to Boston in 1827 to accept the editorship of the magazine. Ten years later, in 1837, Louis A. Godey bought Ladies Magazine and changed its name to Godey’s Ladies’ Book where Sarah remained as editor for another thirty years. During her tenure as a magazine editor, Sarah Josepha Hale became hugely influential as an arbiter of good taste, manners, family life, and “domestic science.” While she was not an advocate for women’s equal political involvement, she was a strong supporter of female education (helping to establish Vassar College), and opportunities for women to achieve economic independence in a variety of occupations. She also published emerging American writers, giving them an audience of up to 150,000 readers. These writers included Harriet Beecher Stowe, Lydia Maria Child, and Catherine Sedgwick, Lucretia Mott, Emma Willard, and Susan B. Anthony; Edgar Allan Poe, Henry David Longfellow, Ralph Waldo Emerson, and Nathaniel Hawthorne.

While working as one of the country’s foremost magazine editors, Sarah Josepha Hale also published poems, short stories, plays, novels, and a women’s encyclopedia titled Woman’s Record; or, Sketches of All Distinguished Women from the Creation to A.D. 1854, Arranged in Four Eras, with Selections from Female Writers of Every Age. Her 1830 book titled Poems for Our Children contained the popular poem we know today as “Mary had a Little Lamb.”

In 1833, Sarah established the Seaman’s Aid Society in Boston’s North End to provide employment for the wives of sailors as seamstresses and a place for them to sell their work. The Society also opened a Mariners House in the North End as a sailors’ boarding house, and developed an industrial school for seamen’s daughters and a day nursery. A proud patriot, Sarah campaigned for the preservation of Mount Vernon, George Washington’s home in Virginia, along with her Bunker Hill Monument project which she funded through a massive seven-day fair at Boston’s Faneuil Hall in 1840.

Another legacy of Sarah Josepha Hale’s is the establishment of Thanksgiving Day as a national holiday. With the approach of the Civil War, Sarah believed a national day of thanksgiving would draw families and the nation closer together. She lobbied President Lincoln for his support, and enlisted her magazine readers to do the same. In 1863 President Lincoln declared the fourth Thursday of November Thanksgiving Day, and since then a mythology has grown around the origins of what really took place in Plymouth, Massachusetts. By the 1970s, Wampanoags from the Plymouth area began to protest the holiday and re-educate the American public about Native American history. Thanksgiving Day remains both popular and controversial.