The North End Walk starts at the marker for the Mothers’ Walk on the Rose Kennedy Greenway between Milk and State streets on the east side of the Greenway. It crosses the Greenway and winds through the narrow streets of the North End, often paralleling the Freedom Trail. The walk presents the lives of women from a variety of ethnic groups. Beginning with Yankee women active in support of the Revolutionary War, the walk continues with the activities of Irish, Jewish, and Italian women in the nineteenth and twentieth centuries. The area is one of Boston’s oldest neighborhoods. Its narrow streets are filled with the hustle and bustle of residents, shoppers, and tourists enjoying the Italian restaurants and groceries as well as historic sites and specialty shops.

Directions: Go to the marker for the Mothers’ Walk on the east side of the Greenway between Milk and State streets.

(Click on a number for details on each site.) 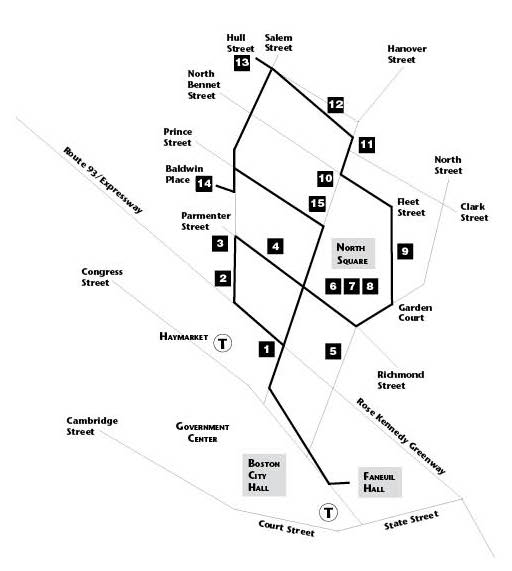 1: Rose Kennedy Greenway and North End Parks
The Rose Kennedy Greenway caps the Central Artery Transportation Project. The entire Greenway, which stretches from the North Station to a few blocks below the South Station, consists of  landscaped open space and a number of neighborhood parks. The Greenway honors Rose Fitzgerald Kennedy (1890-1998) who was born in the North End and lived there as a child. Rose Kennedy is especially remembered as the mother of President John F. Kennedy, Attorney General Robert Kennedy and Senator Edward Kennedy. She devoted her life to raising her children and was active in supporting her sons’ political campaigns as well as programs for children with special needs.
Directions: Continue on the Greenway to Commercial Street. Turn right to cross the street, continue on Cross Street to North Street. Turn right to 150 North Street.
Return to top

Directions: Return to Cross Street, turn right. Continue to Salem Street and turn left. Go across the street to the Greenway and continue across the Greenway to the Surface Road to Zipporah Potter Atkins plaque.

Zipporah Potter Atkins (c. 1645-1705), the first African American woman to purchase a home in Boston, was born to parents enslaved by Captain Richard Keayne. She was free because the 1641 law legalizing slavery in Massachusetts did not include children. Her father, Richard Done, received an inheritance from Keayne’s will that was passed on to her and possibly used to buy the property on Salem Street in 1670. The deed was uncovered at the Massachusetts Archives by Dr. Vivian R. Johnson, a retired Boston University history professor. Dr. Johnson also discovered that Atkins had initiated the deed of sale in 1699, making her the first African-American woman in Suffolk County to do so. When Zipporah Potter married and took the surname Atkins, the ceremony was conducted by prominent Protestant clergyman Cotton Mather.

Directions: Return to Cross Street. Turn left to Salem Street. Go across to the corner of Salem and Cross.

3: Home of Sophie Tucker Formerly 22 Salem Street
Sophie Tucker (ca.1884-1966) was born Sonya Kalish while her mother and brother were en route from Russia to the United States to join her father in Boston. Sophie’s father had deserted the Russian army, immigrated to the United States and found work in Boston under the name “Charles Abuza.”  The family lived in Boston as the Abuzas for the first eight years of Sophie’s life and then moved to Hartford, Connecticut, where she began singing in her father’s kosher restaurant. By the time she was seventeen, she was performing in New York City and on her way to headlines in vaudeville. Her signature song was Some of These Days. In later life she became a philanthropist for Jewish causes.

4: Boston Public Library; North End Union  25 Parmenter Street
Across the street from the North End branch of the Boston Public Library is the former location of the North End Union founded in 1892 to meet the needs of Irish, Jewish, and Italian immigrant families. Boston’s first public playground, a sand garden, was started by a committee of philanthropic women in the yard of the Chapel that occupied the site in 1886. “Playing in the dirt is the royalty of childhood,” said committee member Kate Gannett Wells (1838-1911). Mothers supervised children at first; later, employed kindergarten teachers read to the children and taught them crafts and led them in marching and singing. The public library branch is built on the former site of the Charlotte Cushman School, named for the renowned nineteenth century actress who was born in a house on this site in 1816. Inside is a diorama of the Ducal Palace in Venice made by artist Louise Stimson (18980-1981).

The former home and grocery store of the family of Clementine Poto Langone (1898-1964) was on this site. As a child, she helped pack Italian food products to send west to Italian immigrants working on the transcontinental railroads. The grocery store was on the first floor with living quarters upstairs. When Clementine married Joseph Langone Jr. in 1920, she moved next door to 190 North Street.In the 1930s, after her husband was elected to public office, she helped many Italian immigrants become citizens so they could be eligible for social security benefits and provided food and clothing to Italian people out of work. She was an active member of the North End Union.Return to top

6: Home of Rachel and Paul Revere; Rachel Revere Park 19 North Square
When she became Rachel Walker Revere (1745-1813) by marrying the recently-widowed Paul Revere in 1773, Rachel took on the care of the six surviving children born to Paul’s first wife, Sarah Orne Revere (1736-73), who died four months after her eighth child was born. Rachel had eight more children, three of whom did not reach maturity.In 1775, Rachel held the family and business together when the British did not allow Revere to return to Boston after his famous ride. She eventually joined him in Watertown until they returned to their home after the British evacuated Boston on March 17, 1776. Across the street is Rachel Revere Park, first dedicated in 1946 and restored at the time of the Bicentennial in July 1976.Return to top

Sarah Josepha Hale (1788-1879), editor of Boston’s Ladies’ Magazine, established the Seaman’s Aid Society in 1833 to provide employment for the wives of sailors as seamstresses and a place to sell their work. The Society also opened a Mariners House in the North End as a sailors’ boarding house and developed an industrial school for seamen’s daughters and a day nursery. Hale later became the editor of Godey’s Lady’s Book. In September of 1840, Hale organized the great women’s fair which raised enough money to complete the Bunker Hill monument. It had stood unfinished for more than a decade.

The birthplace of Rose Fitzgerald Kennedy (1890-1995) was probably a bow fronted building like the one at No. 6 Garden Court. She was the first child of six born to Josephine Hannon and John F. Fitzgerald, who became Democratic boss of the North End’s Ward six and a leading Catholic spokesman for the Irish community, before being elected mayor in 1905.

9: Universalist Meeting House 332 Hanover Street
Writer Judith Sargent Murray (1751-1820), an advocate for women’s equality, attended Boston’s first Universalist church at this site when she moved to Boston in 1794. Her husband, Reverend John Murray, an early Universalist minister, held the church’s pulpit from 1793 until 1809 when he suffered a stroke. Among the progressive ideas preached here was the equality of male and female soul – not unlike views espoused years earlier by Anne Hutchinson and Mary Dyer. In her writing, Murray used her theological knowledge to challenge the centuries-old “Fall of Eve” myth and its damaging effect on views about women.

10: Old St. Stephen’s Church 401 Hanover Street
The only remaining church in Boston designed by architect Charles Bulfinch was completed in 1804. Its history reflects the neighborhood. In 1862, it became a Roman Catholic Church and Rose Fitzgerald Kennedy and her father were christened here. On the pews are the names of the North End women and men who helped raise the funds for the church’s restoration in 1965. A marker in memory of Rose Kennedy commemorates her baptism.

Three women prominent in North End history are honored by plaques on the left wall of Revere Mall. At the age of ten, Ann Pollard (1620-1725) was probably the first white woman to come ashore in Boston, landing with Governor John Winthrop at the foot of today’s Prince Street. Dr. Harriot Keziah Hunt (1805-75), who grew up on the waterfront at the foot of Hanover Street, became a doctor through self-study after being refused permission to attend lectures at Harvard Medical School. A women’s rights advocate and social reformer, Hunt advocated health education for women. Charlotte Cushman (1816-76), who was born on the site of the present North End branch library, became an internationally-known actress renowned for playing both male and female roles. She established a salon in Rome for women sculptors including Boston sculptors Anne Whitney and Edmonia Lewis  and Watertown’s Harriet Hosmer.

Directions: Walk past the Old North Church and St. Francis of Assisi Garden to Salem Street. Cross to Hull Street.

12: Paul Revere Pottery and Library Clubhouse 18 Hull Street
The first home of the Paul Revere Pottery, founded in 1908 by librarian Edith Guerrier (1870-1958) and artist Edith Brown (1872- 1932) and funded by philanthropist Helen Osborne Storrow (1864-1944), was in the basement of this building. Reflecting the philosophy of the Arts and Crafts Movement, the pottery provided worthwhile employment for young North End Italian and Jewish women. The lower floors of the building served as the Library Club House under the supervision of Guerrier where young women formed clubs for reading, storytelling, and dramatics named for the meeting times. Fanny Goldstein (1895-1961), the assistant librarian at the North End branch, edited the newsletter for the Saturday Evening Girls. (She went on to become the first Jewish woman to head a branch of the Boston Public Library in the West End, compiled a Judaica bibliography and was curator of the library’s collection.) The Saturday Evening Girls continued to meet until 1969. The Pottery moved to Nottingham Hill in Brighton in 1915, operating until 1942.

Directions: Return to Salem Street, walk down the street and cross Prince Street to Baldwin Place on the right.

14: Hebrew Industrial School Baldwin Place
In 1889 Jewish philanthropist Lina Hecht (1848-1920) founded the Hebrew Industrial School (HIS) for girls near the North Bennet Street Industrial School. After Lina’s death, the settlement house opened for both boys and girls as The Hecht Neighborhood House and moved to Bowdoin Street in the West End. At a time when nearly a third of the North End’s population was Jewish, the school was established to help Eastern European Jewish immigrants adapt to American life. Anxious to teach their own youth, the Hebrew Ladies Sewing Society, reorganized by Hecht in the South End, donated cloth and sewing machines for HIS classes in millinery, pattern cutting, hand and machine sewing.  In 1936 reconfigured as a community center, the organization followed the Jewish community into Dorchester.  The Hecht House purchased the former Home for Destitute Jewish Children on American Legion Parkway where it operated for more than 20 years, merging with the Roxbury YMHA in the late 1950s. Again, reflecting the changes in demographics and needs of the community, the building was sold in 1970 to the Lena Park Housing Development Corporation.

15: St. Leonard’s Church Hanover Street, between North Bennet and Prince Streets
St. Leonard’s Church was the first Roman Catholic Church founded by Italian immigrants in Boston. Built in 1873, St. Leonard’s was restored in 1988. Women were prominent in the drive which raised more than a million dollars for the project. Their names are included on the tablets in the church’s Peace Garden.

Directions: Turn back down Hanover Street and walk to the Rose Kennedy Greenway.