Melnea Cass Boulevard in Lower Roxbury is named for one of Boston’s most beloved and effective advocates for African Americans in Boston. She was relentless in her pursuit of educational and economic opportunities and racial justice for her community. Known as the “First Lady of Roxbury,” Melnea Cass’s activities ranged from volunteering on committees, serving on boards, and accepting city-appointed commissions, to giving money to students who graduated from school.

Born in Richmond, Virginia in 1896, Melnea Agnes Jones’s father worked as a janitor, her mother as a domestic worker. Melnea’s father wanted a better life for his children, including a proper education, so he moved the family to Boston’s South End when Melnea was five years old. She attended the Boston Public Schools. Three years later, her mother died and the children’s “Aunt Ella” stepped in to take care of them. She soon moved the girls to Newburyport, Massachusetts, under the care of Amy Smith where Melnea attended grammar school. Melnea returned to Boston to attend Girls’ High School for one year when Aunt Ella, recognizing her niece’s striking intelligence, found the money to send Melnea to St. Frances de Sales Convent School in Rock Castle, Virginia, a Catholic school for African American and Native American girls. Melnea Jones graduated in 1914 as the valedictorian of her class.

Returning to Boston, Melnea looked for work as a salesgirl. Denied opportunities because she was African American, she took a position as a domestic worker until her marriage in 1917 to Marshall Cass, a soldier in the Army during World War I. Their first child, Marshall, was born while Marshall Sr. was away on duty; when Melnea’s husband returned from the war, the Casses had two more children, Marianne and Melanie.

At about this time, Melnea Cass became involved in her community as an activist. With her mother-in-law’s encouragement, when women achieved the right to vote in 1920 Melnea helped organize African American women to register and cast their first vote. At the same time, she encountered William Monroe Trotter, one of Boston’s most militant civil rights activists. Melnea Cass was deeply influenced by his lectures, protest meetings, and his newspaper, The Guardian. She joined the NAACP and volunteered what time she could while raising her children.

By the 1930s, Melnea Cass was a force for positive change in Roxbury. She volunteered her services for the Robert Gould Shaw House, a local settlement house and community center named after the commanding officer of the all-Black Civil War regiment. She founded the Kindergarten Mothers to encourage early education. She contributed her time and talent to the Pansy Embroidery Club, the Harriet Tubman Mothers’ Club, and the Sojourner Truth Club. She worked in the Northeastern Region of the National Association of Colored Women’s Clubs as a secretary and helped form the Boston chapter of the Brotherhood of Sleeping Car Porters, a national organization that developed and sustained African American communities all over the country.

Melnea Cass served as the president of the Women’s Service Club for more than fifteen years, during which time she initiated the Homemakers Training Program to assure domestic workers of social security and other benefits. She worked to expand employment opportunities for African Americans in stores and hospitals—drawing, of course, on her own experience—often attending protests against racist hiring practices. With Muriel and Otto Snowden, she helped to found Freedom House, a nonprofit, community-based organization dedicated to human rights and advocacy for African American rights in Boston. Freedom House programs also addressed urban renewal, minority employment, education equality, and interracial cooperation within the City of Boston.

In 1950 Boston Mayor John Hynes appointed Melnea Cass as the only woman charter member of the anti-poverty agency Action for Boston Community Development (ABCD), which assisted people who lost their homes to urban renewal efforts. From 1962 to 1964, she served as president of the Boston branch of the National Association for the Advancement of Colored People (NAACP) and organized demonstrations against the Boston School Committee’s policy of segregation. In 1966, Governor John Volpe declared May 22 Melnea Cass Day in honor of her 70th birthday and years of volunteerism. More than 2,000 people joined the celebration.

In 1968, the Governor dedicated the Melnea Cass Metropolitan District Commission Swimming and Skating Rink in Roxbury to improve the lives of inner city youth. From 1975 to1976, Melnea Cass was chair of the Massachusetts Advisory Committee for the Elderly. During her lifetime, she received honorary degrees from Northeastern University (1969), Simmons College (1971), and Boston College (1975) prompting friends to call her “Dr. Cass.” She was also named “Massachusetts Mother of the Year” and a “Grand Bostonian.” 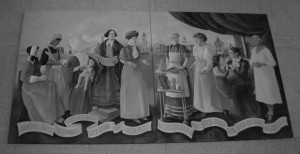 Three years after her death in 1981, the City of Boston opened Melnea Cass Boulevard. The YWCA in Boston’s Back Bay is also named for Melnea Cass to acknowledge her tireless work for children, families, and career development.

Melnea Cass’s motto in life: “If we cannot do great things, we can do small things in a great way.”