The Upham’s Corner Walking Trail was developed by a class of young women at the Codman Academy Charter School during a 10-week course on Dorchester Women’s History. Each Saturday, the students met and learned about local women’s history through field trips, interviews with community members, and primary source research. The young women in the class each selected a woman to research, and this brochure is the result of their efforts.

This Dorchester Women’s History project is a partnership between the Boston Women’s Heritage Trail, the Codman Academy Charter School and the Dorchester Historical Society, and was made possible thanks to a grant from the History Channel’s Save Our History program. We hope that this trail is the first of many trails that document the rich and significant history of women in Dorchester. We also hope that you as community members and/or visitors enjoy this trail and use it as an opportunity to learn about some of the many significant women who made history in Dorchester.

(Click on a number for details on each site.)

2: Anna Clapp Harris Smith (1843–1937) 69 Pleasant Street, Jones Hill
Anna Clapp Harris Smith lived in the colonial house built by her grandfather Samuel Clapp. In 1899, Mrs. Smith was infuriated when she learned of the growing number of cases of animal cruelty in Boston. As a result, she founded the Animal Rescue League. The League supported animal shelters and provided care for aging workhorses. (written by Lucy Biayemi)Return to top

3: St. Mary’s Infant Asylum Cushing Avenue at Windemere, Jones Hill
This Catholic orphanage opened on Bowdoin Street in 1872. It was run by the Sisters of Charity of St. Vincent de Paul. The asylum moved to the old Greene estate on Jones Hill, where it served low-income families regardless of their religion. The maternity ward at St. Mary’s was the forerunner of St. Margaret’s Hospital, which became a major gynecological hospital serving women in greater Boston.
Return to top

4: Sarah Baker (1806–1866) 565 Columbia Road and Cushing Avenue, Upham’s Corner
Sarah Baker was an entrepreneur who started her own box band business, which she carried on for 40 years at Lower Mills. Miss Baker made so much money that when she died in 1866, she let enough money to build a church. The Baker Memorial Church was built on Columbia Road (the site is now a parking lot next to the Strand Theater). (written by Sherry Jones)Return to top 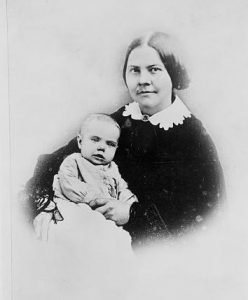 Alice Stone Blackwell (1857–1950) Mount Monadnock Apartments, 714-721 Dudley Street, Upham’s Corner
Alice and her parents moved to Pope’s Hill when it was first developed into a residential neighborhood. Her mother was Lucy Stone, who was not only the first woman editor of a nation-wide newspaper but was the first woman to retain her name after marriage. Alice Blackwell also became a leader of the women’s rights movement. She edited The Woman’s Journal after her mother’s death and fostered cooperation between the two major suffrage organizations.(written by Minnetta McKenzie)Return to top

6: Sarah Wentworth Apthrop Morton (1759-1846) Dudley and Burgess Streets
Sarah Wentworth Apthrop Morton was a writer and poetess. One of her epic poems was called The Virtues of Nature; An Indian Tale. It was published in 1790. Sarah’s book was one of the first books to raise awareness about the poor treatment of Native Americans. Her neighbor wrote The Power of Sympathy, considered the first American novel, about Sarah’s unhappy marriage. The couple lived in an elegant Federal mansion on this site until moving to an estate on Jones Hill. by Sandra Michaud)Return to top

The Swans moved to a Federal mansion on this site in 1796, where they raised five children. Patriot James Swan had amassed a fortune in France following the American Revolution Hepzibah proved as capable in business as her husband. When James was unfairly imprisoned, she managed his business affairs, particularly investing in real estate on fashionable Beacon Hill.Return to top

8: Ann & Betty (1740s)Old North Burying Ground, Upham’s Corner
The Massachusetts slave census of 1754 listed 13 female slaves living in Dorchester. Ann, who died as a child, and Betty, who died at the age of 25, were the “servants” of Captain Robert Oliver, a plantation owner who came from Antigua about 1837. The small headstones marking the graves of these women survive in Dorchester’s oldest cemetery.Return to top

9: Elida Rumsey Fowle (1843–1919) 654 Columbia Road, Upham’s Corner
Seventeen-year-old Elida Rumsey went to Washington during the Civil War to become a nurse. When told she was too young, Elida sang to soldiers in the wards. With the help of Mrs. Walter Baker, Elida organized a soldiers’ library. She eventually became the youngest member of the Massachusetts Army Nurses. After the war, Elida and her husband John Fowle moved to Upham’s Corner, where she raised two emancipated slave children and did local civic work.
Return to top