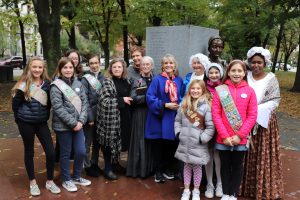 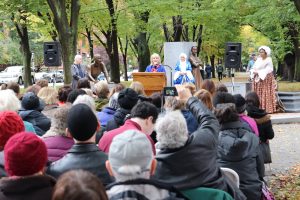 A hearty group of fans gathered to honor the 15th Anniversary of the Boston Women’s Memorial on a chilly October 28, 2018.

Festivities included messages from the sculptor of the Memorial, Meredith Bergmann, and from strong, consistent supporters of writing women into history.

Board members of the Boston Women’s Heritage Trail brought to life the three women depicted in the Memorial – Abigail Adams, Phillis Wheatley and Lucy Stone – by portraying their friends and reading from letters they exchanged which described the issues they faced in their times. 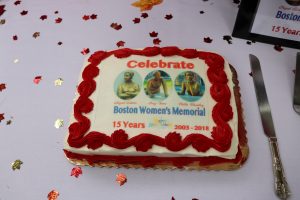 Many thanks to those who contributed to the program.

A partnership between The Boston Women’s Heritage Trail and the Mayor’s Office of Women’s Advancement, Martin J. Walsh, Mayor.