Each teacher received a wealth of resources including the BWHT Guidebook and BWHT Biographies of 21 Notable Women. Then the teachers brought their summer learning to their students in a BWHT-sponsored Women’s History Fall Project.

We invite you to share the highlights of our BWHT 5th Grade Fall Projects below: 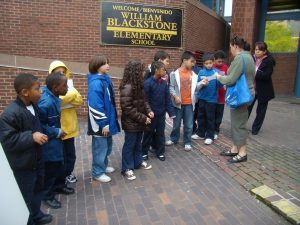 “I learned that a principal used to be called a supervisor and Lucretia Crocker was made a principal when they were all men. She must have been real smart.”

Women Then and Now: How Far We Have Come 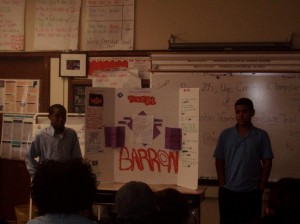 Students paired women with achievements in common and exchanged letters between pairs that were enlightening. They also created timelines and visual presentations. Ms Guillerault’s class plans to participate in a Pen Pal Project with Ms Tarentino’s class at the Murphy.

Reflections/Quotes:
“We are doing these projects because we learn all about men, but we need to know about women.” 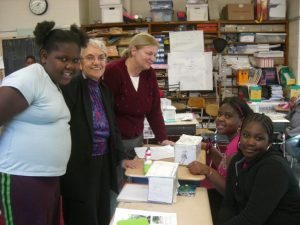 Students created bulletin boards for the hallways, six sided boxes with facts about each women, mini-sculptures, and presented their Artsy Ladies Learning Festival for visiting classrooms and guests. Background music was provided by Amy Beach

Reflections/Quotes:
The Special Education class was so taken with our sculptures and the Ladies, that they’ve done their own showing… They invited my class — we had a blast!”

History: Where It All Adds Up 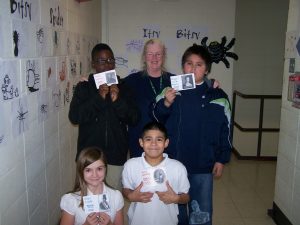 Students used their BWHT resources to complete activities about Number Sense & Operations and Geometry strands of Math. They created timelines, a quilt, and a trivia card game, incorporating math skills throughout.

Reflections/Quotes:
“Why is that lady dressed like Abraham Lincoln?” – referring to Ellen Craft 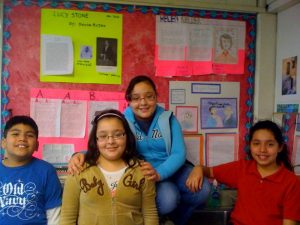 Students formed chapters of The Boston Women’s History Club, researched the women, completed written projects, timelines and posters, and selected a spokesperson from each respective chapter to give an oral presentation.

Reflections/Quotes:
Valeria Alvarez, the spokesperson from the Abigail Adams Chapter, said: “I connect to Abigail Adams because if I were in her place I would do the same things that she did and I would fight for women’s rights.

Women Who Paved The Way 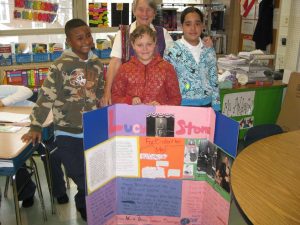 Students researched five Boston women, created posters, gave presentations, and wrote letters back and forth between the women.

Reflections/Quotes:
“Melnea Cass fought for black doctors and nurses to get jobs at hospitals, so when I had an asthma attack last year she helped me too.”

“Phillis Wheatley is my hero. She inspired me to write a poem for her. Poetry helps me express myself, too.” 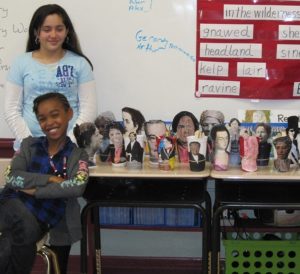 Students wrote persuasive postcards from the perspective of each woman and wrote 10 important facts about the women on sticks that were placed in decorated cups.

Reflections/Quotes:
About Melnea Cass: “This woman lived in my community, Roxbury, and it excited me that I have a connection with someone who did great things for the community.” 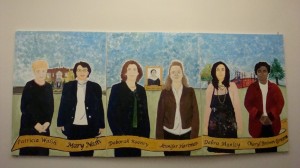 Students visited and researched the Boston Public Library mural and created biographies, timelines and bio-blocks, noting how the nine women made a difference in their lives. Realizing similarities in six of their much respected school leaders, they interviewed them, created a brochure, produced digital bios of each, presented projects to the entire school and their notable women, and created their own lasting mural for the school, portrayiing: Mary Lyon, for whom the school is named; Dr. Nash, founder of the school; Mrs. Rooney, principal; and Mrs. Greene, Ms. Deb and Mrs. Hartman – all Teachers of the Year.

Reflections/Quotes:
“Actually, all the women have made a difference to our lives. Without them, this school wouldn’t be successful — just like the Nine Notable Women of Boston.” 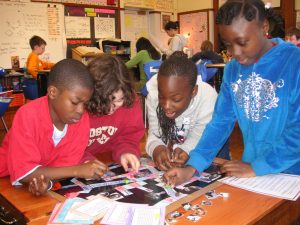 After researching the women, students created posters and made a board game with educational reading comprehension questions about the women.

Reflections/Quotes:
“It’s really important that we learn about how things have been unfair in the past and how women have worked to change things, because one kid is going to be president someday, and that kid will think back to 5th grade, remember, and hopefully make good choices that will affect everyone.” 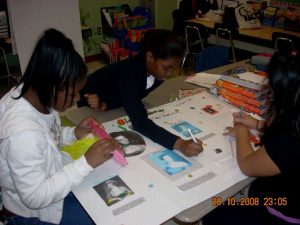 Students researched each woman’s role in ending slavery. They created life maps and learned important dates, events, and contributions. Working in threes they constructed tri-fold posters with pictures, facts and quotes. They then presented their work on the stage of the auditorium.

Reflections/Quotes:
“I had a lot of fun learning about Ellen Craft.”

“I never even knew about Deborah Sampson or about Phillis Wheatley.” 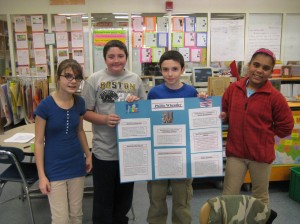 Students formed groups, learning about each of their women’s connection to Boston, educational experience, family life, what she is best known for, and other interesting information. Some groups also built clay models of their woman and made signs representing their lady. Some students dressed up as their historical character. Finally, each group shared with others using posters, props and video.

Reflections/Quotes:
Ms. Tarentino’s class plans to participate in a Pen Pal Project with Ms Guillerault’s class at the Conley. 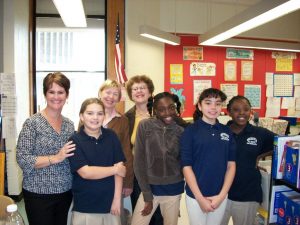 Students researched the women with an in-depth non-fiction study. They created portraits of the women and gave oral reports.

Reflections/Quotes:
“I liked Amelia Earhart because she was a tomboy and she had a great sense of adventure.” 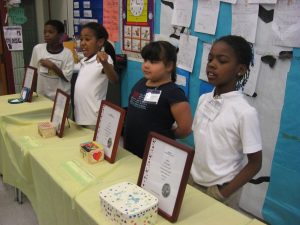 Students wrote poetry in honor of Philllis Wheatley, created a box of museum treasures in honor of Isabella Stewart Gardner, and invited Susan Dimock (portrayed by Mary Smoyer) to the classroom to tell her story.

My Dog, by Isaiah Adedeji 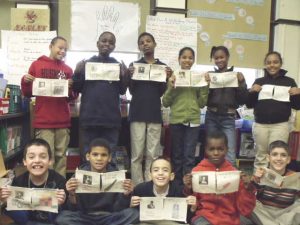 Students created bookmarks and designed a quilt square for each woman. As a culminating activity, the students presented each woman during a “Time for Kids News Broadcast”.

Reflections/Quotes:
“Mrs. Hardy, you know the woman that I am studying? I saw her name up on a street sign in Roxbury”

“I got a Phillis Wheatley bookmark. She’s a great poet.”

We the People… Hear Our Voices 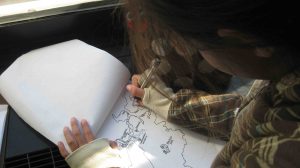 Reflections/Quotes:
Ms. Murray said: “My favorite part was watching them use the parchment paper and ink quill pens and listening to them talk about how people had it so much harder then, from the issues of women not having a voice to the actual writing with ink quill pens.”

BWHT invites you to celebrate women’s history not only in March, but all year round.

For more information on the Fall Projects, contact:Barbara Locurto or Mary Howland Smoyer.