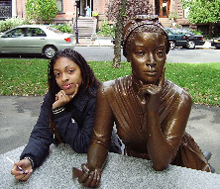 “Remember the Ladies,” wrote Abigail Adams to husband John in 1776, “and be more generous and favorable to them than your ancestors!” In the nearly two and a half centuries since Abigail’s oft-quoted note, however, neither John nor the generations of men that followed did much to remember, credit, or commemorate the numerous women who helped mold and maintain the New Republic. Even in Boston, the acknowledged “Cradle of Liberty,” the accomplishments of women were generally footnotes and afterthoughts, rather than the stuff of biographies, annual celebrations, and public statues.

In 1989, that all began to change, when a group of Boston Public School teachers, librarians, and their students brainstormed and inaugurated the Boston Women’s Heritage Trail. Like the Hub’s two extant walks—the Freedom Trail and the Black Heritage Trail—this new historic trek promised to take visitors through fascinating slices and stories from Boston’s illustrious past. Unlike its predecessors, the Boston Women’s Heritage Trail highlights the work of women, from household names like Abigail Adams, Phillis Wheatley, Amelia Earhart, Louisa May Alcott, and Rose Kennedy, to less-familiar leaders like Chew Shee Chin, Julia O’Connor, Clementine Langone, and Melnea Cass.

For the past three decades, the Boston Women’s Heritage Trail (BWHT) has worked to restore women to their rightful place in the history of Boston and in the school curriculum by uncovering, chronicling, and disseminating information about the women who have made lasting contributions to the City of Boston.

The thirteen walks throughout Boston on our website and in our guidebook commemorate more than 200 Boston women who changed history in a wide variety of settings, occupations, and backgrounds. BWHT has also sponsored the development of several mini-trails in Boston neighborhoods blazed by teachers and students in the Boston Public Schools (BPS) and at a city charter school. In addition, BWHT collaborated with the Museum of Fine Arts to develop a trail, “Women Artists in the Back Bay.”

In connection with the dedication of the Boston Women’s Memorial on the Commonwealth Avenue Mall in 2003, BWHT developed the curriculum Writing for Change: The Power of Women’s Words. Additionally, “The Ladies’ Walk” trail was also developed based on the lives of the three women honored in the statue—Abigail Adams, Lucy Stone, and Phillis Wheatley—showing where they lived and worked and other sites which honor them. An earlier curriculum, Biographies of Twenty-One Notable Boston Women (1993), includes short biographies, primary source materials, and activities targeted to elementary school students.

Board members also give guided walks and presentations, teach classes and are actively involved in a wide range of projects that promote women’s history, including helping to develop women’s history trails in Portland and New Brunswick, Maine; Salem, New Bedford, and Southcoast, Massachusetts; and internationally in Reykjavik, Iceland, and Oslo, Norway.

Donate  to support our mission to restore Boston women to their rightful place in history! Some of our projects planned for our 32nd year (and beyond) include: