Past Events Sponsored and Co-Sponsored by

In 2009, the Boston Women’s Heritage Trail celebrated its first two decades by sponsoring and co-sponsoring an outstanding series of programs and events.

Throughout March 2009, Women’s History Month, the calendar was packed with lectures, presentations, and special guided Trail walks. Read about our sold-out Roxbury Trolley tour co-sponsored by Discover Roxbury and the magnificent concert “From Symphonies to Suffrage: Music of Amy Beach’s Boston” with celebrated pianist Virginia Eskin and soprano Jayne West.

In July 2009, we held a Summer Institute for Grade 5 teachers in the Boston Public Schools.

A Studio of Her Own: New Perspectives 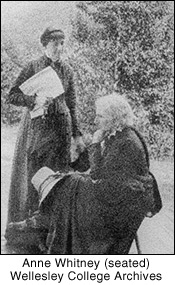 Who Owns Your Food and Water, Globally and Locally

Women Against the Vote: The Anti-Suffragists

In Her Own Words: Susan B. Anthony

Focus on Women at the Boston Public Library: A Tour of Right and Wrong in Boston

From Symphonies to Suffrage: Music of Amy Beach’s Boston

Music By Women of the Americas from Three Centuries

in collaboration with the Old South Meeting House

Come celebrate the life of Rose Fitzgerald Kennedy. Join Boston Women’s Heritage Trail tour guides as we exp lore the North End to learn about Rose’s background and childhood. Enjoy the Rose Kennedy Garden and the Mothers Walk. Bring your own memory of Rose and her family to share.

Free. Rain or shine. All ages. Meet at the Mothers Walk on the Rose Kennedy Greenway, at the corner of Atlantic Avenue and Milk Street.